You know, I still can’t really get over the fact that it’s here. Through a development cycle fraught with setbacks, delays, and general community frustration, the Aerosoft CRJ has finally been released. It seems.., surreal, that the product set to maybe never release has finally come out, and even though I will miss the occasional joke about a delayed release, I think I would gladly take the released plane over said jokes any day of the week. So, now that the legend has landed, let’s get to evaluation time. Has the CRJ lived up to the enormous hype? Has it lived up to the delays? There’s only one way to find out, and that’s by flying it to death. Let’s see how it performed.

The Aerosoft CRJ package comes in the form of a single exe file, roughly 1.1GB in size, from mirrors in the USA, EU, and World which I assume is somewhere in Oceania. While the USA mirror was broken the day of launch, it was patched the next day and I was able to grab the file pretty quickly. The installer is much like any other Aerosoft product wrapper (e-mail and serial are all you need) and once those fields have been filled out, you’re well on your way to installing the CRJ. Installation finished in under a minute, and after a quick reboot, my PC was all ready to go with the CRJ. Included with the package is not only the plane, but a load manager, a boatload of high-quality documentation, and some up-to-date Aerosoft NavDataPro navdata. You also get a livery manager and some PFPX profiles. Overall, a quick and easy set up, and a nice suite of utilities for you to play with.

Get all other Aerosoft planes out of your head. This one is different. This one looks different, feels different, and is different. The exterior is incredibly detailed, sharp, and beautiful to look at. Everything you know about the A320X is replaced by beautiful curves, a sporty look, and a great model. Detail is key here, and Aerosoft absolutely hit that nail on the head. Every probe, port, and important doo-dad sticking out of the airplane is modeled, to scale, and is textured beautifully. While some parts of the liveries are less sharp than I would prefer them to be, I will gladly take the slightly lower res than normal textures in exchange for the metric tons of spare VAS you get flying this airplane. Even the -900, an airplane notorious for not being much of a looker, looks great in the simulator, and easily matches its smaller cousin in quality. Even down to the smaller, less noticeable things like the hydraulic lines in the gear get the nice-modeling treatment, with high-detail texturing that rivals other parts of the airplane to boot. One thing I wish this airplane did have was a 3D cabin however. I think for a lot of simmers the small VAS trade off for a rudimentary 3D cabin would have been worth it, especially given where other things were cut down to make spare VAS. While the 2D textures do a surprisingly good job of looking 3D, they just don’t give you that true 3D feeling you would get with even a basic cabin. Overall though, this exterior model was very well done, and gets two big thumbs up from me 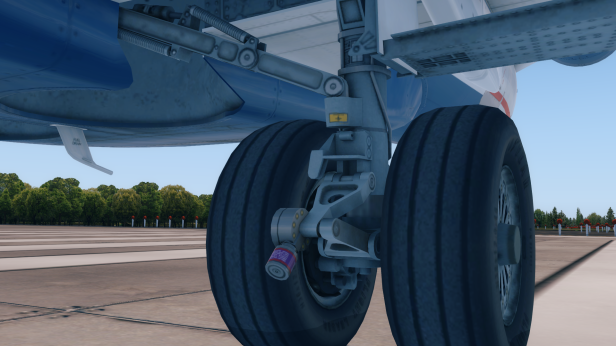 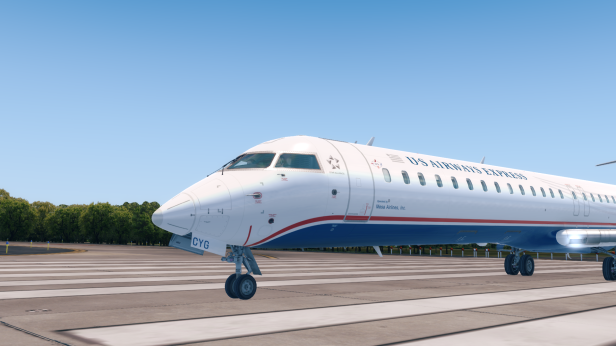 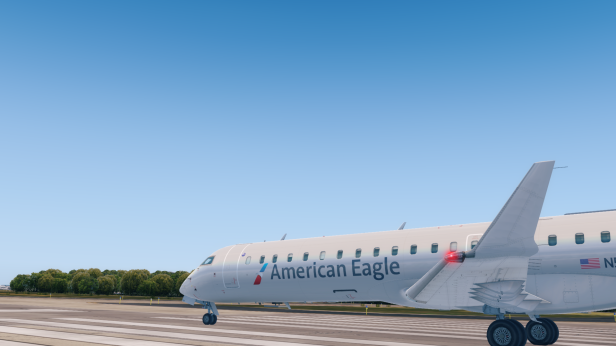 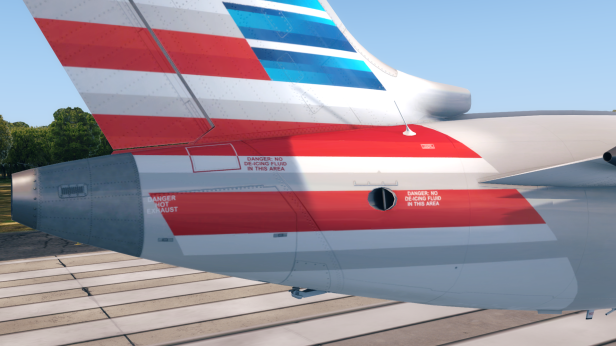 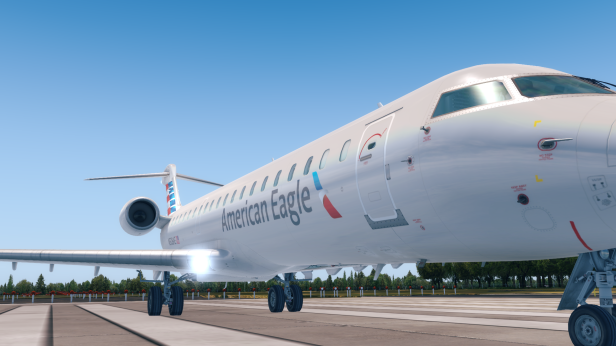 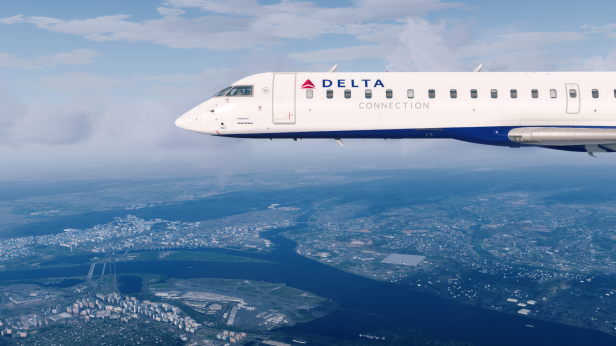 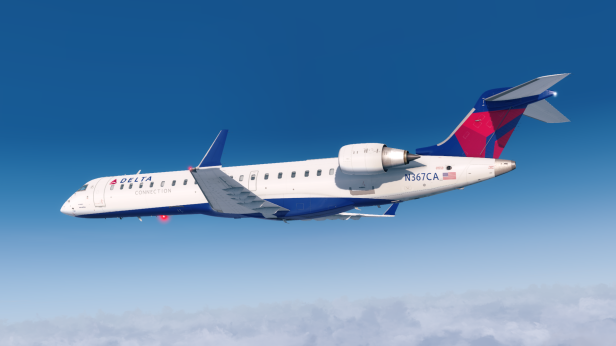 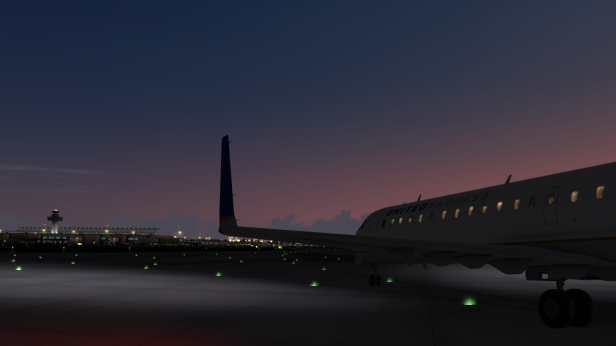 If the exterior model was anything to go by, this interior model isn’t going to be much of a surprise to anyone. Beautiful modeling, nice metallic looking overhead switches, an incredibly detailed pedestal, and overall really high quality modeling. The panels have a really convincing wear texture that doesn’t scream being used and abused for 10 years, but rather suggests that this airplane has been in the air for a few years, and although it’s been taken care of, small discolorations and other visual imperfections have started to form. I really like it, it gives the airplane a more realistic look than when textures are made to look as if they’ve been attacked by sandpaper and a knife. The cockpit also includes a helpful little tablet named DAVE, who will help you with V-Speeds, loading and unloading the airplane, changing settings, and running through checklists.

It surprised me just how many knobs you could move in the cockpit, even if they do nothing in the simulator. It’s fun to unlock the cabin door during turn-around, and then lock it back up before the push, even if it has no effect in the simulator. Giving people things to press, even if they’re useless, is a great way to add perceived control to something, and I’m glad that a developer has finally acknowledged this.

It’s also worth noting about this cockpit that it has a very different philosophy to Boeing and Airbus. There’s very little logic to transfer. Learning the systems and flows anew as if you’ve never flown the other planes is the best way to learn with this beast, as it requires a much different procedure than the Boeing and Airbus planes do. Try starting the engines without reading the manual (like I did) and you’ll quickly find yourself confused, alone, wasting fuel, and frustrated. Do yourself a favor and learn the cockpit. Once you do it’ll become one of your favorite places in the simulator to ever sit. Again, Aerosoft really outdid themselves, and broke from tradition in a big way. A massive two thumbs up from me 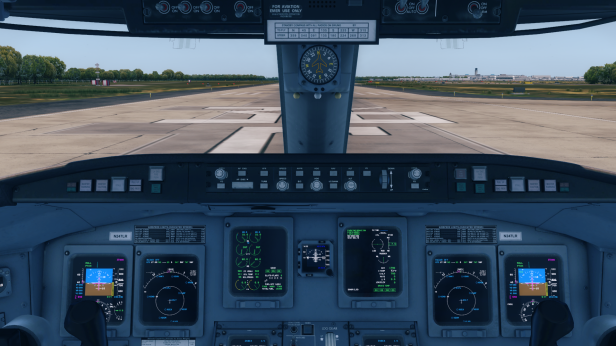 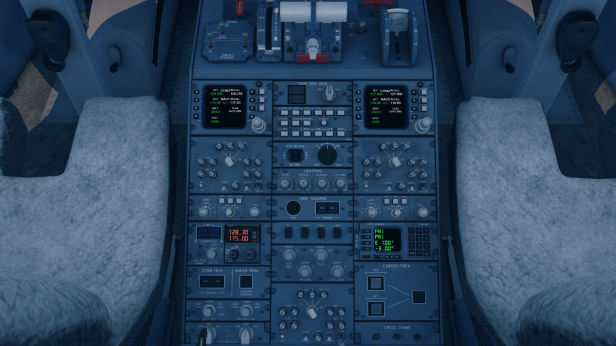 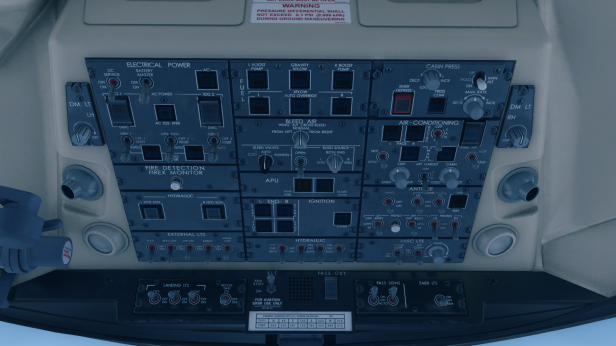 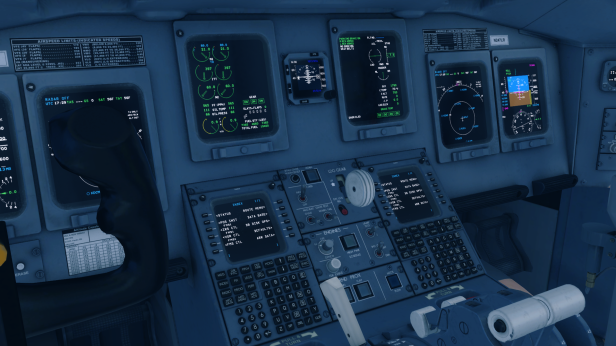 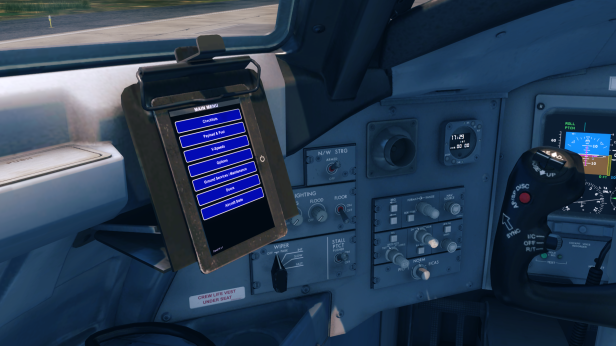 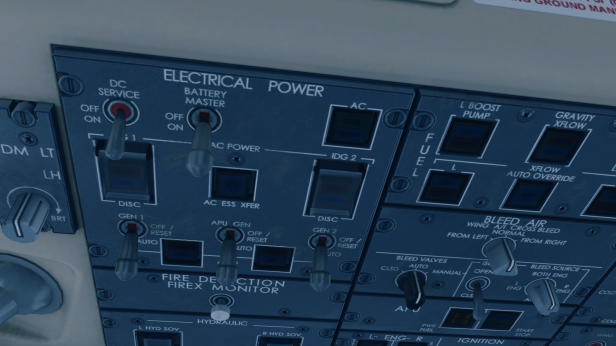 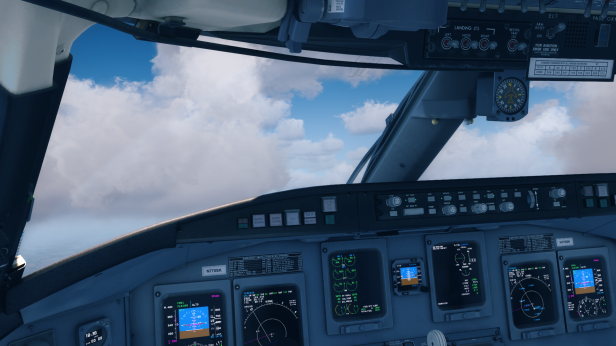 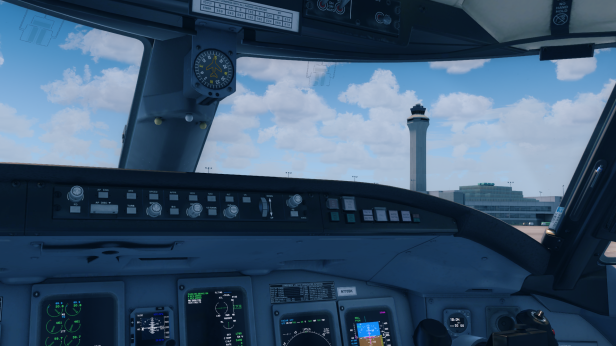 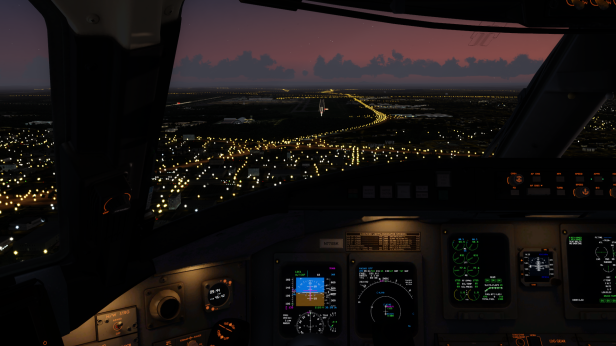 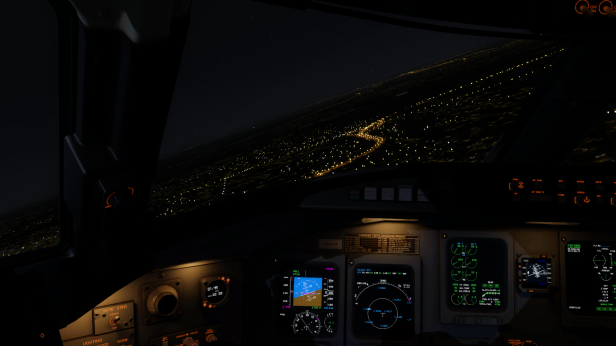 The systems of this airplane are not study level. Aerosoft don’t claim them to be, and they most certainly aren’t. There are definitely things missing that some hardcore CRJ fans would want, and some things (as of release) were still somewhat broken, like the DEP and ARR pages. However, this airplane absolutely nails the true feeling of just how “quick and dirty” the world of CRJ aviation really is. There is no sophisticated LNAV and VNAV system that you follow the entire route. If you want to climb faster move the throttles forward and voila, increased climb. Need to get down faster, move the throttles back and it’ll increase the descent rate to keep the speed. This airplane is an absolute joy to hand fly because you actually fly it. You’re no longer a child of the magenta line flying this thing.., you have to actually do things in order to complete a flight successfully. Most systems you’d be using on a regular basis are modeled well though, and for someone who isn’t massively into the CRJ, I couldn’t poke big holes in the way the plane operates. Again, I think the moral of this plane is to get the A320 out of your head. Aerosoft took a different approach to make a vastly different beast, and it really shows. This airplane is incredibly new for Boeing people, and small things to learn like arming the reversers and starting the engines are joyful little breaks from the boring procedure of button mashing that every simmer knows better than the back of their own hand. And yes, you can complain that the cabin doesn’t De-pressurize right when you operate it manually or any other number of small faults wit the rendition, but that misses the fundamental point of this airplane. It’s a fun plane to just fly, it’s not meant to be dissected for small little systems, it’s meant to be a pilots plane with some automation to help. Once you accept this, the airplane becomes a massive joy to toss around on small routes. The joy of the CRJ is flying it as a true pilot, and it’s also the misadventures you can get into with such a small and agile jet. Regional fields, high fields, low fields, hot fields, cold fields, corn fields, this plane is a joy to toss everywhere, because everywhere it goes it brings its unique quirks and charms.

Performance of this plane was stellar, as can be expected from the team at Aerosoft. Aggressive performance saving measures were used, and although occasionally it is noticeable where they cut corners, it’s all worth it for the performance you get. Not once did I manage to OOM this bird, nor did I manage to bring it down to unusable FPS levels. You can view my system specs at the end of this article to compare your system to mine to gauge how well it will perform.

The sounds (Custom recorded by TSS) bring life to this airplane. Crisp, clear, and pleasing audio immerses you well into the overall experience of the airplane, and really ties the whole package together. Here’s a video with some good audio samples in between the talking if you want to have a listen: https://www.youtube.com/watch?v=cWgSaBWZkMA

The experience is often what sells an Aerosoft plane, and I have to say, they really hit the demographic they were going for. Not too complicated, but enough to give satisfaction to a large spectrum of users. For a new user, this plane is enough of a handful to keep them busy for a long time learning an airliner, and for a veteran flyer, this plane still offers enough depth to keep you coming back, even if it isn’t study level. It’s all about how the systems impact the feel of flying, and how much fun you have flying. Here’s the feature list to prove that this is what Aerosoft was going for:

The Bombardier CRJ 700 and 900 series are some of the most often used regional airliners today – every 10 seconds, one of them takes off. You will find them at most airports worldwide. Although not very popular with passengers as those seats are indeed very small and you cannot even stand upright if you are tall, airline companies prefer them because they are efficient and reliable. They are still in production, and although the newer models have better seats, larger overhead bins and better sound proofing they will never be really comfortable.

Pilots like to fly them because they are powerful, agile, and a joy to fly manually. It is often described as ‘sporty’. They also demand more flying skill than a modern Airbus or Boeing because the flight management systems are limited, for example: no auto throttle and only advisory vertical navigation.

In our simulators, they were missing for a long time, but the Aerosoft / Digital Aviation CRJ 700/900 X provides the aircraft we have all been waiting for. As with all internal aircraft projects, the CRJ was created with the job of the pilot in mind. It fully focuses on the task of piloting this aircraft. We feel that things that have never happened in real life should not play a major role and that allows us to create a high-end aircraft for a modest price.

CONCLUSION
This airplane, although not being study level, is an absolute joy to fly. It’s a departure from the typical fly-by-the-buttons airplane, and instead asks you to play an active role in flying the plane at all times. Combine this with the stunning model, good performance, and excellent soundset, and you have yourself a plane that is absolutely worth asking price. Although there are some bugs yet to be squashed (annoying given the extended beta period and long delays meant to fix those issues,) this airplane is still an immense amount of fun, and gives you a good plane to finally fly short routes in. For the low asking price of $50 that they want, this airplane is a fantastic deal. With more improvements and features to come, this is one investment I would highly recommend.